October 2022:
Presented some of my research as part of the Virtual Seminars in Precambrian Geology series. The presentation can be found on Youtube here.

September 2022:
Thanks to the Department of Earth Sciences at Dartmouth College for having me down for a talk!

June–July 2022:
Had a very successful field trip to Yukon to study the middle Proterozoic archive of the Coal Creek Inlier (Tr'ondëk Hwëch'in Territory) with our research group at McGill and collaborators. The Proterozoic inliers of Yukon host a rare, well-preserved archive of sedimentary deposition during this important time interval. We studied a range of units spanning over 800 million years in order to better understand basin evolution and environmental conditions during the middle Proterozoic. Maggie Whelan, Leigh Anne Riedman, Wilder Greenman, Elizabeth Sullivan and myself taking in the views of the shallow marine carbonates of the Tonian Craggy Dolostone
April 2022:
Took part in the Grand Canyon Field Forum organised by Karl Karlstrom, Laura Crossey, James Hagadorn, Susannah Porter, Mark Schmitz and Mike Timmons. We had a fantastic group interested in a wide range of research topics related to the Grand Canyon Supergroup and the Great Unconformity. Alongside Susannah Porter, Heda Agić, Sarah Slotznick and Kelly Tingle, my work in this area was focused on the late Tonian Chuar Group. 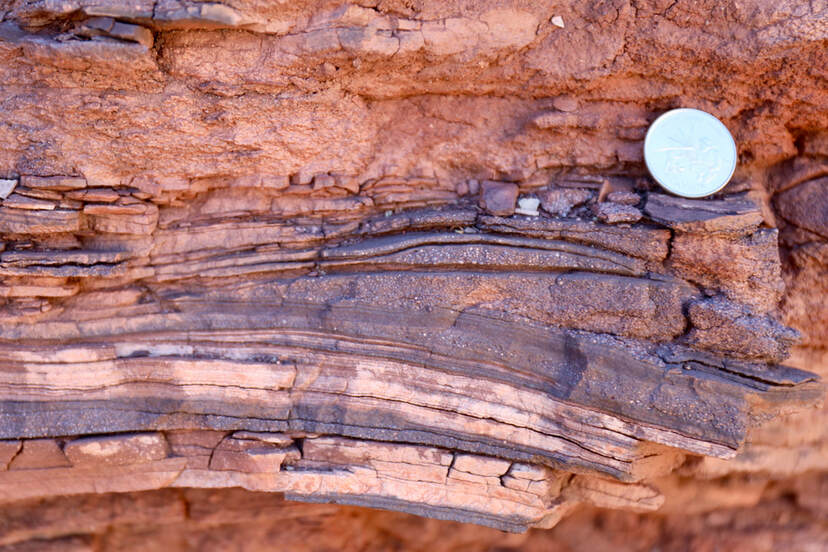 Lenses of oolitic ironstone within laminated sandstones of the Galeros Formation 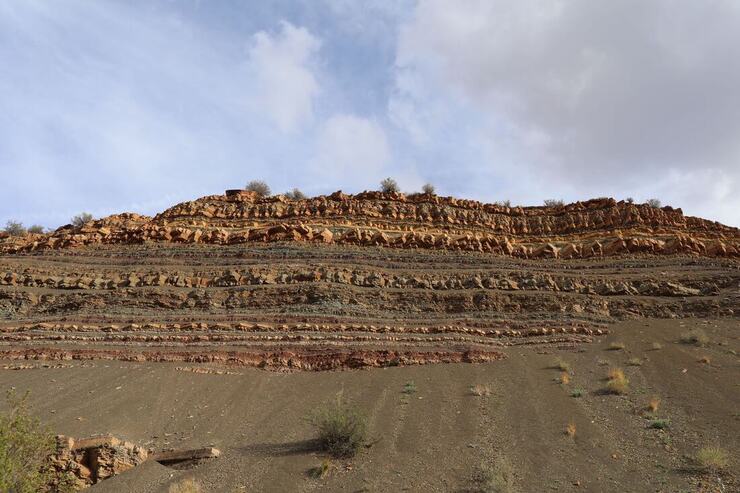 January 2022:
Excited to finally share our latest work on ironstones as a proxy for Proterozoic oxygen levels, with Changle Wang, Chris Reinhard, Dan Asael, Devon Cole , Galen Halverson, Susannah Porter , Nir Galili , Itay Halevy , Rob Rainbird, Tim Lyons & Noah Planavsky. Iron-rich chemical sediments are widely used as proxies for palaeo-seawater chemistry. Ironstones are nearshore marine sedimentary rocks featuring iron ooids that are common in the Phanerozoic geological record. Rare Precambrian ironstones can offer valuable insights into shallow seawater chemistry during the middle Proterozoic "iron formation gap", following the cessation of widespread iron formation deposition in the Palaeoproterozoic. Estimates for surface oxygen levels during this interval, also known as the "boring billion", are highly debated, obscuring the relationship between environmental conditions and early eukaryotic evolution. We show that the fractionated iron isotopic signatures of these Proterozoic ironstones are indicative of partial oxidation in shallow seawater, likely requiring low O2 concentrations. This stands in contrast to Phanerozoic ironstones, which are unfractionated and support complete Fe(II) oxidation. The ironstone record shows that these low surface oxygen conditions continued until a rise in the late Tonian Period, consistent with other geochemical proxies and fossil evidence for the emergence of complex eukaryotic ecosystems.
September 2021:
New paper out in Geobiology, led by Ash Hood, which documents dolomite beds in the Cryogenian Yudnamutana Subgroup, which appear to have been deposited during the Sturtian ice age. These deposits, alongisde other Sturtian synglacial carbonates described globally, the question of whether authigenic marine carbonates could have precipitated during Snowball Earth. The implications of synglacial carbonate precipitation for chemical weathering, ocean chemistry, and climate during "Snowball Earth" are explored with a global biogeochemical model. Without continental silicate weathering and carbonate burial as a CO2 sink, it is difficult to maintain the greenhouse effect below the deglaciation threshold for longer than a few million years (compared to the ~60 million year duration of the Sturtian ice age), as well as maintaining a high seawater Mg/Ca ratio. These results suggest that a small degree of chemical weathering was likely maintained during Snowball Earth, possibly via the continental weathering of subglacial bedrock by meltwater. 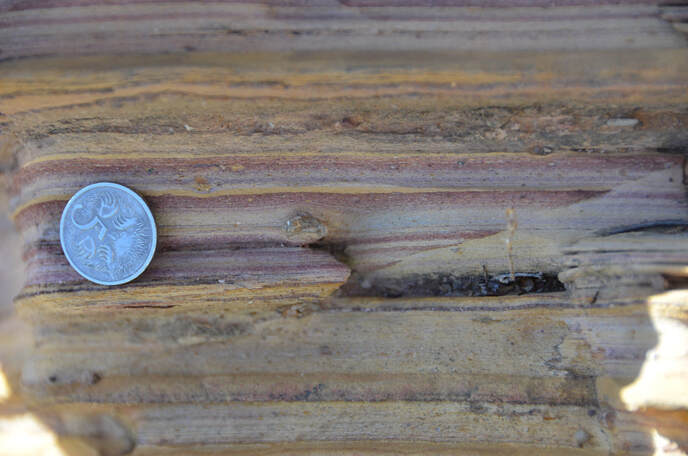 Ice-rafted debris within the dolomite- and hematite-rich laminae of the Cryogenian Wilyerpa Formation, Oraparinna, Ikara–Flinders Ranges.
July 2021:
Conducted field work on the late Palaeoproterozoic sedimentary archive of Lake Mistassini and Lake Albanel in Eeyou Istchee, with Malcolm Hodgskiss (Cambridge) and Maggie Whelan (McGill). Because of the pandemic, we were required to avoid contact with the local communities, and we are thankful to the Cree Nation of Mistissini for permission to conduct research on their land. Our research was focused on the palaeoenvironmental implications of the carbonates and iron formation of the Orosirian Mistassini Group. 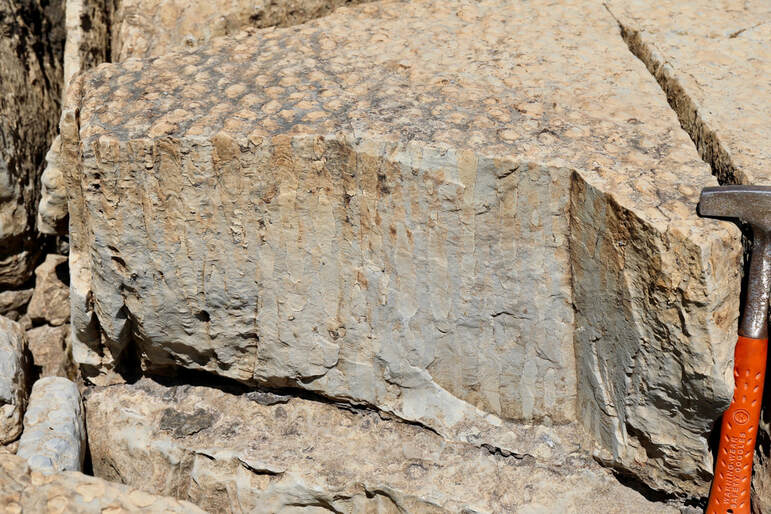 Orosirian (ca. 2 Ga) columnar stromatolites (Mistassinia wabassinon; Hofmann 1978) in the Lower Albanel Formation.
March 2021:
Excited to share this new paper led by Katie Maloney (University of Toronto Mississauga), reporting new fossil algae in the ca. 900 Ma Hematite Creek Group from our field work in Yukon! These likely represent some of the oldest green seaweeds. The emergence and expansion of green seaweeds in marine environments would have had a huge impact on ecosystem structure and photosynthetic production in the lead-up to the evolution of animals in the Neoproterozoic. Check out the paper in Geology.

Macroscopic fossils with a septate filamentous construction, interpreted as possible benthic green macroalgae, from the Tonian Dolores Creek Formation (Hematite Creek Group), Yukon, Canada.
December 2020:
Recent work investigating the paleoenvironmental significance of sedimentary manganese enrichments in the ca. 1580 Ma Gaoyuzhuang Formation (North China), led by Hao Fang and Dongjie Tang (Chinese University of Geosciences, Beijing), was published in Paleo3.
​
September 2020:
Thanks to funding from Moore–Simons Project on the Origin of the Eukaryotic Cell, I'm excited to be starting a new postdoc at the McGill Department of Earth and Planetary Sciences on the environmental conditions of Proterozoic eukaryotes with Galen Halverson, in collaboration with Leigh Anne Reidman and Susannah Porter!

September 2020:
Presented some of my research into ironstones from the Yukon—and shallow marine iron cycling in the Tonian—at GSA Connects Online 2020. Thanks to session chairs Tim Gibson, Ash Hood, Anne-Sofie Ahm and Peter Crockford for inviting me and organising a fantastic session on reconstructing the environmental conditions and evolutionary trends of the Tonian Period.

February 2020:
Thanks to Geotop for having me present my research as part of their departmental seminar series at the Université du Québec à Montréal.

Brennan O'Connell's paper (with Malcolm Wallace, Ash Hood and Noah Planavsky) on the peritidal deposits of the Cryogenian Angepena Formation was just published in Precambrian Research, offering insights into the shallow marine redox state in between the two Snowball Earth events. 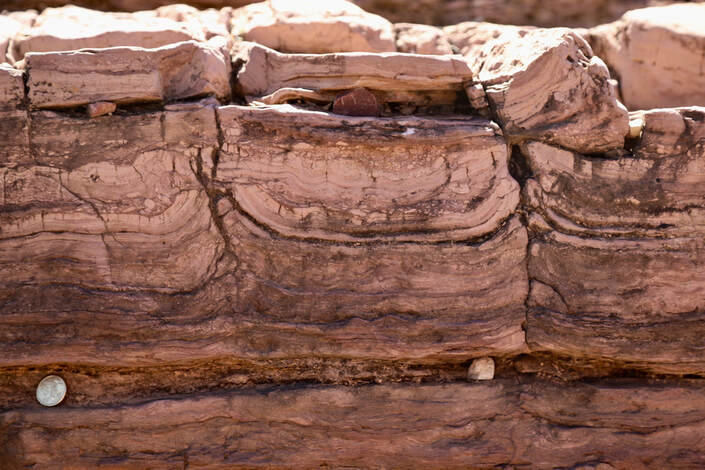 Teepee structures and intraclast breccias within hematite-rich, dolomitic siltstones of the Angepena Formation, indicating deposition in an intertidal environment during of the nonglacial interlude of the Cryogenian. Arkaroola, Flinders Ranges, South Australia
January 2020:
It was great to visit Kingston, present some of my work to Queen's University​ Department of Geological Sciences and Geological Engineering, and see the incredible collection of Ediacaran fossils of Guy Narbonne. 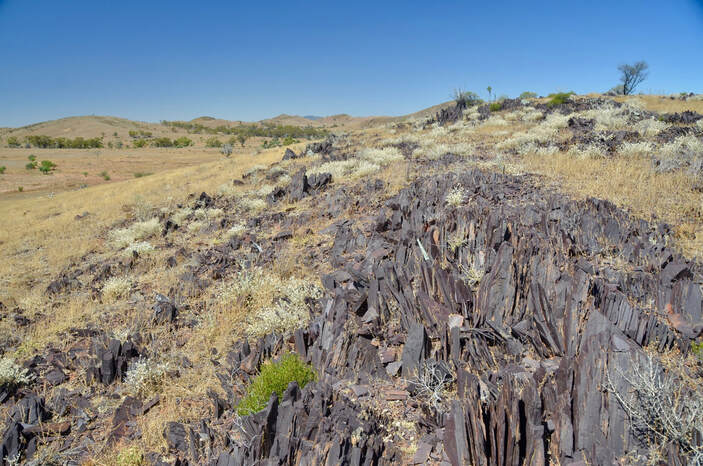 Hematitic siltstones of the Holowilena Ironstone show evidence for the delivery of oxygenated subglacial meltwater into the anoxic oceans during the ca. 720–660 Ma Sturtian glaciation. Holowilena South, South Australia
November 2019:​
Had a successful field trip to Sanjiang County, Guanxi Province (China) to look at Cryogenian rocks with Prof. Weiqiang Li and Prof. Chang-zhi Wu from Nanjing University. Thank you to Prof. Li for hosting me at the State Key Laboratory for Mineral Deposits Research (Nanjing University)! 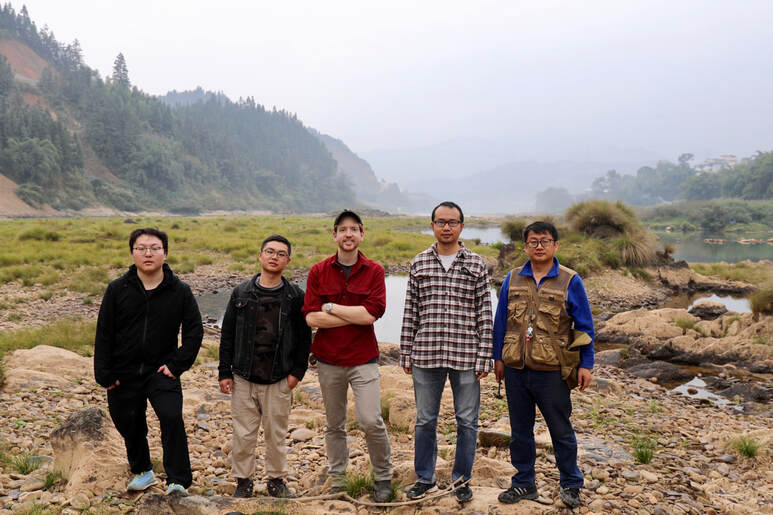 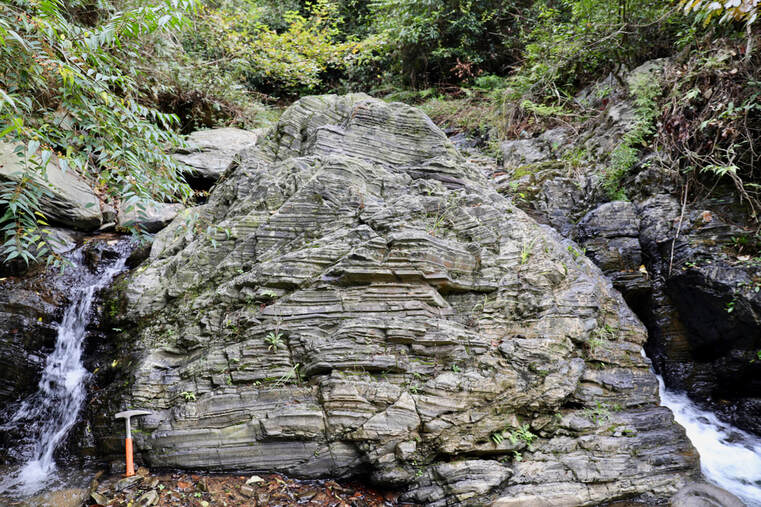 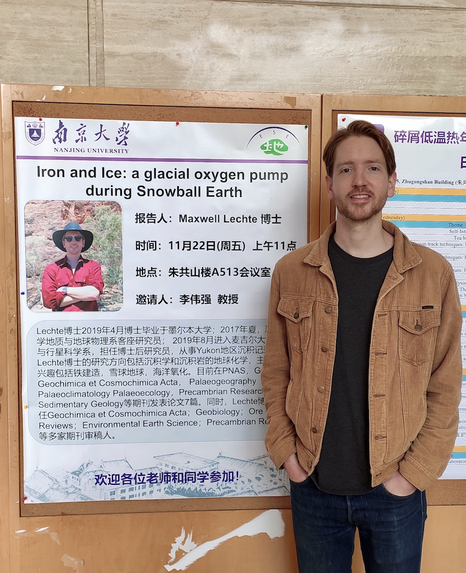 October 2019:​
Thanks to Susannah Porter, Leigh Anne Riedman and the rest of their research group at UCSB for hosting me in Santa Barbara this week!

August 2019:​
Arrived in Montreal to begin my postdoc at McGill!
I have joined the Precambrian Research Office & Publican Society, the research group headed by Galen Halverson.

The Polar Continental Shelf Program — Science Report 2018 describes some of our work conducted in the Werneckes in 2018. 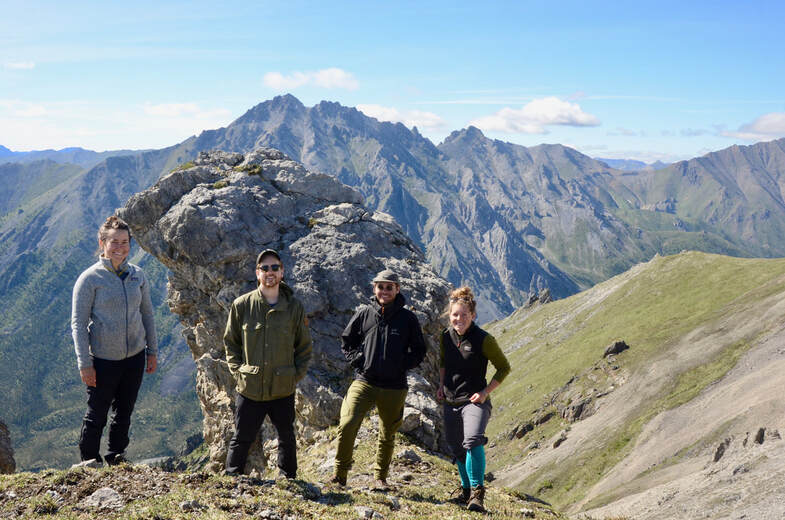 Brennan, myself, Wilder and Ash take in the views of the late Tonian Calliston Lake Formation, Ogilvie Mountains. 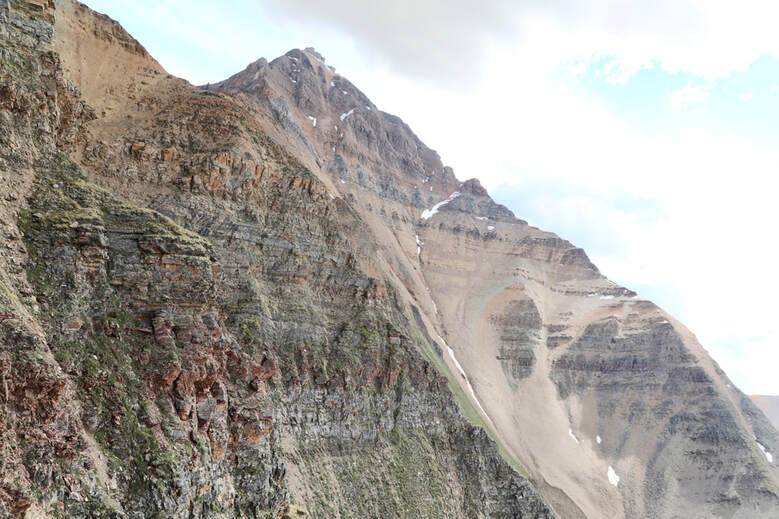 Thick sedimentary succession of the sandstone-dominated Tonian Katherine Group preserved in the Wernecke Mountains, Yukon.
May 2019:​
I will be taking on a Postdoctoral Fellowship to work on the Tonian sedimentary archive of the Yukon with Prof. Galen Halverson at McGill University, funded by the Fonds de recherche du Québec - Nature et technologies.

Had a great session at GAC-MAC 2019 in Québec with Alessandro Ielpi entitled 'Precambrian sedimentology: Open session on recent advancements in paleogeographic and paleoenvironmental reconstructions in deep time​'.

April 2019:​
Graduated from the University of Melbourne alongside and my supervisors and colleagues from the Sedimentology and Earth's Surface Evolution research group, headed by Malcolm Wallace and Ash Hood. 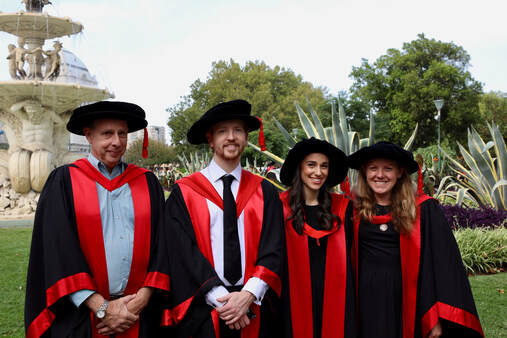